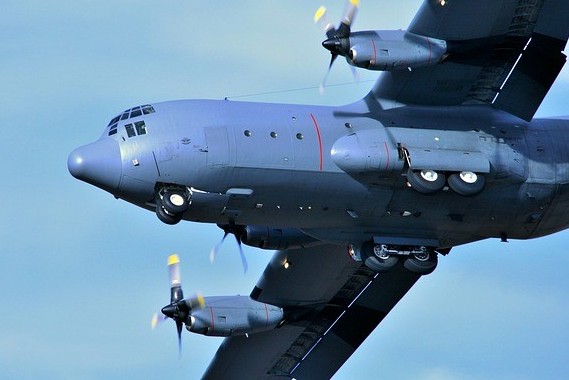 The C-130 Hercules is a four-engine turbo-prop built by the Lockheed Aircraft as a Cargo/Troop transport aircraft. Besides the basic role of hauling cargo and troops, it was used as a medevac, gunship, airborne assault, search and rescue, weather recon, aerial refueling, maritime patrol, aerial firefighting and a tactical military aircraft.

There have been more than 40 variants built since the early 1950s and is currently still being produced by now Lockheed-Martin. There have been over 2,500 C-130 Hercules of all varieties built. Nearly every country in the world has a C-130 for many purposes. There is a civilian version called Lockheed L-100 being used in over 60 nations. 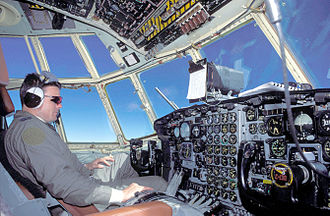 The Korean War which began in 1950 and with a peace armistice (no peace treaty has ever been signed) in 1953 showed that the piston driven transports of World War II, the Fairchild C-119 Flying Boxcar, the Douglas C-47, and the Curtiss C-46 Commando were outdated.

The transport should be able to carry 92 passengers, or 72 combat troops, or 64 paratroops in a cargo compartment that would be approximately 41 feet long, 10 feet wide and 9 feet high with a hinged folding ramp in the tail of the aircraft.

The ramp was necessary to be able to load military equipment such as Sheridan tanks, jeeps and other rolling stock. It also must be able to support the dropping of special airdrop cargo including rolling stock and even “cluster bombs”.

The aircraft also must be able to use four Allison T-56 turboprop engines which were being designed by Allison aircraft under a separate contract. 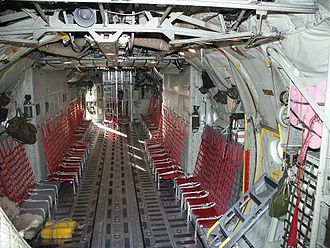 Four of the companies, Fairchild Aircraft, North American Aviation, Martin Aircraft and Northrup Aviation declined to bid for the contract. Of the remaining 5 companies, Lockheed and Douglas Aircraft were in close competition.

The Lockheed design team was headed by Willis Hawkins which included Hall Hibbard and Kelley Johnson. Hibbard who was vice-President and Chief Engineer asked Kelley Johnson what he thought of the low-speed and unarmed aircraft proposal.

Kelly remarked ..”that this aircraft would destroy the Lodhkeen Company”. Both Hibbard and Johnson signed the proposal and a Lockheed won the contract on 02 July 1951.

The first flight of the YC-130 was on 23 August 1954 with Stanley Beltz, Roy Wimmer, Jack Real and Dick Stanton making up the crew. Kelly Johnson flew a Lockheed P2V as a chase plane on the 61-minute flight from Burbank, California to Edwards AFB in Lancaster, California.

When the prototype testing was completed in the California desert, production began in Marietta, Georgia, where over 2,300 Hercules have been built. The C-130 A had Allison T56-A-9 turboprop engines with 3 bladed propellers.

The C-130B was developed to improve the range with pylon fuel tanks and Hamilton Standard 4 bladed propellers which became standard until the “J” model.

The C-130E had an extended range with large wing tanks and a more powerful Allison T-56-A-7A engines. A whole host of varieties of C-130s were developed through the years as it has been over 64 years since that first test flight.

One other variant was the KC-130F tanker used by the USMC for aerial refusing. The C-130H was introduced in 1974 and is still in use today by several nation’s military. In the 1990s, the C-130J came out with new engines and a 6 bladed propeller, digital avionics and other new systems. 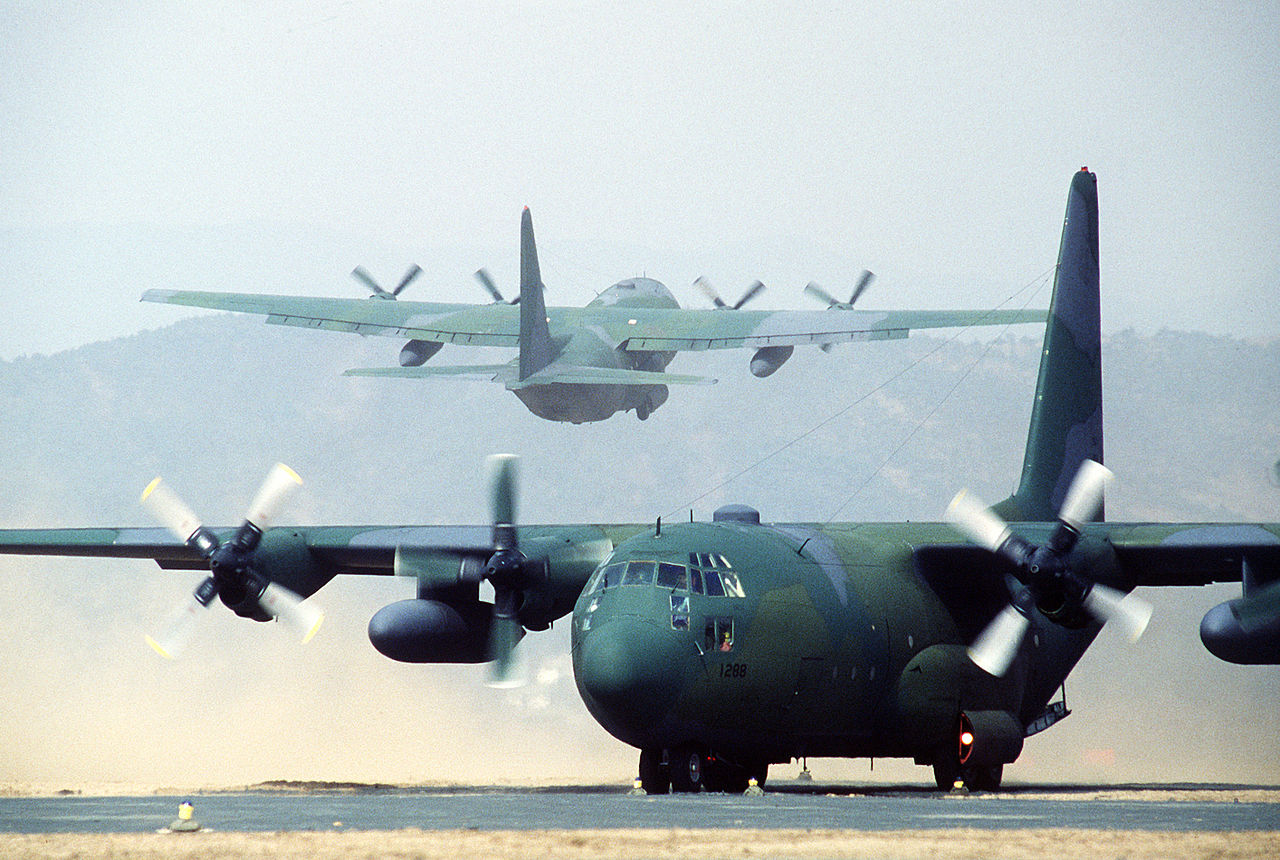 In 1956 the first production C-130A went to USAF at Ardmore AFB Oklahoma and Sewart AFB Tennessee. In time C-130s were assigned to nearly every theater around the world. The Royal Austrailian Air Force became the first non-American military to purchase the C-130 in late 1958. The Royal Canadian Air Force took delivery of C-i30s in 1960.

The USN/USMC wanted to test the possibility of using a Hercules to be a supply aircraft for USN aircraft carriers. A USMC KC-130 was used for 29 touch and go landings and 21 full stop landings on the USS Forrestal bu USN Pilot Lieutenant James Flatley who was awarded the Distinguished Flying Cross and later was promoted to Rear Admiral.

The project was considered too dangerous for routine supply support and was canceled. The Grumman C-2 Greyhound was then developed as the official Carrier Onboard Delivery ((COD). The Grumman was a twin-engine, high-wing cargo aircraft designed to carry a limited amount of supplies from USN base off-shore to an aircraft carrier.

Some other specialized missions the C-130 was called on to perform in Vietnam was the FAC (forward air control l) over the Ho Chi Minh Trail to lead air strikes on specific targets by B-57 bombers to interdict the supply routes from North Vietnam to the South.

Hercules in the role of FAC would fly missions over North and South Vietnam looking for opportune targets for Allied strike craft to attack.

In Africa, in November of 1964, the C-130s assisted the United States and Belgium military in a hostage situation in the Belgium Congo which required the C-130 land landing and picking up of paratroops and air dropping them near the target areas. The rescue of hostages was a success and the rebels were captured.

During the Indo-Pakistani War of 1965, the Pakistan Air Force modified its small fleet of C-130s to carry bombs on pallets to drop on Indian targets such as bridges, artillery placements, and concentrated troop locations. The bombs which weighted about 20,000 lbs were shoved off the ramp in the aft section of the aircraft over the designed targets.

The Commando Vault operation was to drop 10,000 bombs to clear Landing Zones or LZ for helicopter operations in 1969. They also used these bombs from C-130 Hercules on enemy (VC) base camps and other appropriate targets.

This was unusual for a transport to perform such a task as the sudden shift in weight, of the aircraft, could provide a tricky situation for the pilots.

The Heavey Tea operation was for a C-130 to drop two battery pallets with sensors near the Lop NurChinese nuclear testing area to monitor China’s nuclear weapons program.

This turned out to be a grand success but required the C-130 to fly 6 1/2 hours from Takhli, Thailand to the target area and another 6 1/2 hours at low altitude to return to base.

The Lockheed C-130 was designed to haul cargo, passengers, and troops to designed locations. But the diversity of it made a great artillery platform, gunship (machine guns), even a makeshift bomber.

The Forestry Service used the C-130A, which was retired by the military,  for firefighting and other forestry observing missions. The Hercules was also used to treat oil spills on the ocean, lakes or rivers.

The C-130J is still active with new engines, new electronics, six-bladed propellers and other new systems. The Lockheed C-130 Hercules has been a workhorse for many countries throughout the world and will continue to be for many nations in the years to come.

Where you can see the Lockheed C-130 Hercules

This is Just a Partial List of the Lockheed C-130 Hercules on Display. Check With Your Local Air Museum for More Information.

Tech Specs for the Lockheed C-130H