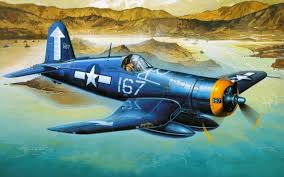 In February of 1938, the USN put out a request for several different types of single and twin-engined fighters, a maximum of 70 mph (for carrier landings) and a range 0f 1,000 mi.

A peculiar specification was that small bombs had to be attached to the winds for bombing enemy aircraft formations.  During the 1930s, the military airwar thinking was to bomb enemy formations from a higher altitude which eventually proved to be impractical.

In June of 1938, the USN signed a contract with Vought to build a prototype for testing.  The Vought factory designation was the V-166B, the USN called it the XF4U.  Rex Beisel led the design team to build a mock-up then a prototype.

Construction of the first XF4U  prototype was called the Corsair.    The plan as to power it with,  also a prototype engine, Pratt & whitney Double Wasp twin-rowed 18 Cylinder radial engine rated at 1,805 hp.  When the prototype was completed in 1940, it had the biggest  and most powerful engine, largest propeller on any USN fighter at that time.

The test flight in May of 1940 went early normal expect for a failed elevator trim failure due to excessive flutter.  This problem was quickly corrected.  On 01 October 1940, the XF4U-1 became the first United States Single engine fighter to fly faster then 400 mph.

On  02  April 1941, Vought  did receive an contract with the USN to build 584 Corsairs.  This was remarkable achievement by Vought as carrier aircraft have to be “overbuilt” due to the stress of deck landings .

The F4U was given the largest engine (available at the time) the Pratt & Whitney R-2800 Double Wasp radial engine rated at 2,000 hp.  The first models used a 3 bladed Hamilton Standard propeller of each blade 13 feet long.

Other problems arose that were overcome, such as the struts could not safely raise the aircraft high enough to keep the propeller from possibly hitting the ground or deck.

Vought redesigned the wing to an inverted gull wing which became the famous trademark of the Corsair.  The aircraft was made with aluminum in the wings and fuselage, but fabric on wing tips,  ailerons, elevators and rudder.

The F4U was the last American to use fabric as new technology  made fabric obsolete.  A “stall Strip” which was about 6 inches was installed on the outboard right wing.

There also was a problem of hydraulic oil from the cowl flaps would splatter on the windscreen causing severe visibility problems .  The oleo struts were too tight causing the aircraft to bounce on deck landings.

These problems would be corrected, but the USN was needing aircraft carrier fighters more quickly then Vought could correct these issues.  The Grumman F6F Hellcat was a lot more forgiving for new and inexperienced pilots, although it was slower then the F4U it would be a better fit with new pilots landing the pitching decks of an aircraft carrier.

The Corsair was given to USMC who would use the F4U on South Pacific islands for raiding Japanese held islands in the area, causing widespread destruction on the enemy land bases.

The famous Baa-Baa Black sheep squadron (VMF 214) would evolve from the Corsair.   But deployment of the F4U  on aircraft carriers was delayed because of the aforementioned design problems.  The Corsair was not used on aircraft carriers until 1944 when the various technical problems had been resolved.

The performance of the F4U was superior to other American fighters at the time.   It was considerably faster than the F6F Hellcat, 23 mph slower than the P-47 and all three aircraft were powered by the same Pratt & Whitney R-2800 engine. 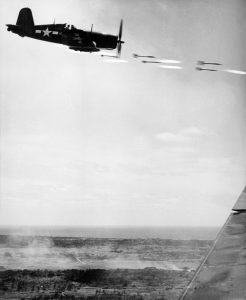 Although the USN received the first production F4Us on 31 July 1942, due to the technical problems which were overcome.   Meanwhile, the USCINCPAC (United States Commander in-Chief Pacific) decided that U.S. aircraft carriers would employ the Grumman F6F Hellcat, due to logistics  support.

The Corsair would be used by USMC on South Pacific islands.  The Marines were excited with the use of the F4U which was quite superior to the F4F Wildcat,  which by now was getting obsolete.

In February 1943 to the end of WWII 1945 the Marines used F4Fs at Guadalcanal other bases in the Solomon Islands  to attack Japanese targets.

Lt. Kenneth Walsh  (USMC) who would rack up 21 kills in the war recalls:

“I learned quickly altitude was paramount.  Whoever had altitude dictated the terms of the battle there was nothing  a Zero pilot could do to change that—we had him.  The F4U could outperform a Zero in every aspect except slow speed maneuverability and slow speed rate of climb.  Therefore you avoided getting slow when combating a Zero.  It took time but eventually we developed tactics and deployed them very effectively.  There were times however that I tangled with a Zero at slow speed one on one.  In these instances I considered myself fortunate to survive a battle.  Of my 21 Victories, 17 were against Zeros and I lost 5 aircraft in combat.  I was shot down three times and I crashed one that ploughed into the line back at base and wiped another F4U.”

The USMC squadrons first based on aircraft carriers occured in December of 1944.  The need for the Corsair grew as Japanese Kamikaze attacks around Okinawa increased from 1944-1945.

At the end of the War F4U and FG (version of the Corsair) over 64,000 operational sorties with 2,1240 air combat victories with air combat losses of 189 to enemy aircraft, the kill ratio was 11:1

During the Korean War from 1950-53, the F4U and the AU-1 (developed from the F4U) were used primarily as a ground attack fighter-bomber as the jet age had come into play and the Corsair was no match for the MIG-15 jet fighter in a “dog fight”. 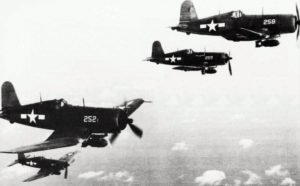 Where you can see the Corsair

This is Just a Partial List of the Mighty F4U, Check With Your Local Air Museum for More Information on the Corsair

Tech Specs for the F4U Corsair

3 thoughts on “The Story of the Vought F4U Corsair”