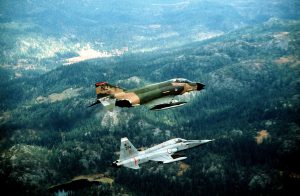 Design efforts began what would be the F-4 Phantom in the early 1950’s for the USN.  The McDonnell Aircraft Corp began reworking their current fighter (F-3H) to comply with the Navy requirements for a Supersonic fighter cable of carrying bombs and more armament.

The new design  would be twin engined with Wright J65 or a General Electric J79 power plants.  However Grumman had the F-9 and Vought the F-8 and thus the “Super Demon” as McDonnell called it was not needed as proposed. 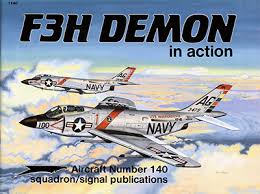 In 1955, McDonnell received a government letter of intent to build a prototype  to be a fleet defense interceptor.

This would be called XF-4H-1 able to carry 4 AAM-N-6 Sparrow III guided missiles and be powered by two jet engines capable of supersonic speeds  and a second crew member who would be an RIO (Radar Intercept Officer).

More on the maiden flight;  on 27 May 1958, the Phantom made it’s first flight,  conditionally you might say, as it developed a hydraulic problem and could not retract the landing gear.

Subsequent flights proved to be more successful.  On 15 February 1960, it completed a “landing cycle” on the aircraft carrier Independence successfully.

On 18 September 1958, production began for the USN and USMC F-4s.  In 1962, USAF also received F-4 Phantoms through Defense Secretary Robert McNamara directive to consolidate military to one aircraft.

The USN/USMC focus or need was interceptor while USAF want a fighter bomber.  The basic design was flexible to accomplish these needs.

In 1963, the USS Forrestal became the first USN carrier to have F-4s deployed.  The Atlantic became the “playground” for the Phantom.  Soon however, Viet Nam was to become the first combat  “arena” for the F-4.

The Bay of Tonkin incident soon produced the first combat sortie in Viet Nam on 05 August 1964.  A USN F-4B shot down a Chinese MIG-17 and then was shot down by either another MIG or by a a Sparrow III from (accidentally) his own wingman.  It was never confirmed which happened.

The first air to air victory  of a North Vietnamese MIG came on 17 June 1965 by USN Commander Louis Page.

Then on 10 May 1972 USN Lt. Randy Cunningham became the first American Ace of the war by shooting down 3 MIG-17s including the North Vietnamese Ace,  Colonel Nguyen Toon.

By the way, it was never proven there was such a person but more of a myth or legend.  None the less,  Lt. Cunningham was credited as a Ace.

The USAF also was a major user of the F-4 Phantom during the Viet Nam conflict.  On 10 July 1965, the first USAF victories were over MIG-17s using “Sidewinder” missiles.

On 24 July 1965, an USAF Phantom was the first American aircraft to be shot down by a SAM (Surface-to-air missile).

The USMC contributed 3 kills to the joint USN/USMC F-4 effort.  It should be noted while the USN went on escort missions over Vie Nam, USMC F-4s were primarily used for close ground support.

The first supersonic “kill” occurred on 02 June 1972, when USAF Major Phil Handley shot down a MIG-19 over “Thud Ridge” with .20MM gunpod in a F-4C.  The speed was 1.2 mach and the only supersonic shoot down of the war.

The F-4 Phantom was used by the following countries through the years:

When I was on Wake Island working for a DOD contractor (the contractor ran the whole island from the Power Plant to Flight Line) we had received the day before a USMC squadron of 12 F-4s on what is called a Transpac.

A Transpac is the movement of of fighter aircraft from their Mainland air base across the Pacific Ocean to Iwakuni AB, JA.

Then in subsequent days the returning squadron came back through Wake Island and spent the night with us before flying to Hawaii and then on to the Mainland base.

The 12 airplane squadron was broken up into two cells of 6 each, due to tanker requirements.  The lead aircraft of the first cell, usually the Squadron Leader, took off without incident.  (I witness this event along side the runway on a service road .)

The number two aircraft started his take-off roll as he went into afterburner (note:  all fighter type aircraft most always use the afterburner for take-off)  I noticed what I first thought was a swarm of flies coming off the Phantom.

Then I realized these were not flies but hundreds of pieces of rubber from the left tire and a large fire ball came out of the exhaust of the left engine.

The aircraft was past Vr and continued the take-off and the tread of what had been on the left wheel was calmly rolling down the runway.

There was nothing let on the main left gear but the rim.  In the excellence of the USMC Aviation, the pilot calmly flew around the island for about 45 minutes to burn off fuel and then proceeded to make a beautiful landing.

The arresting gear brought the aircraft to a stop about a thousand feet down the runway.

Since the left engine had ingested part of the tire, it had to be changed.  Then the excellence of the USMC maintenance took over and changed the engine and the  F-4 and crew departed Wake Island the next day.   TRUE STORY!

The F-4G was called the “Wild Weasel” with upgraded radar and avionics used as a enemy radar jammer and airborne communications aircraft.

Models F-4K and F-4M were sold to the England’s RAF and re-engined with Rolls-Royce Spey turbo-fan engines.

Some of the nicknames the F-4 acquired during the years were:

This list is by no means comprehensive but check at your local air museum for F-4 listings:

Pima Air and Space Museum in Tucson AZ.  This museum has 5/F-4s including a F-4 in T-Bird colors.

Tech Specs for the F-4 Phantom

THANKS, FOR READING!  I HOPE THIS WAS INFORMATIVE!