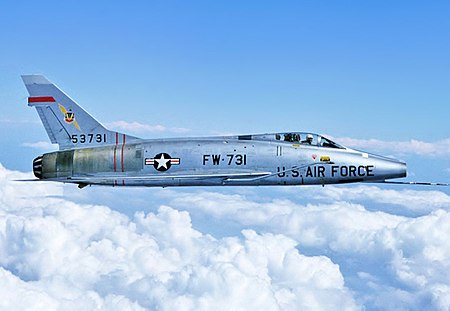 After 100 modifications, the “Sabre 45′” was accepted as the F-100 on 30 November 1951. The first prototype was the XF-100A which made its first test flight on 25 May 1953 and flew at Mach 1.04. The USAF operational test period for the XF-100A was called “Operation Hot Rod” found it to have operational superiority but various design deficiencies.

One of the deficiencies was a yaw instability which could produce inertia coupling. The sudden yawing could come almost instantly at certain configuration that could overstress the aircraft into metal fatigue and disintegration.

Another control problem was called the “Sabre Dance” in which the aircraft pitched violently upward at stall speeds which proved fatal at low attitudes. There are several Hollywood movies of the Korean or Vietnam War eras that show a horrifying scene of an F-100 at near vertical attitude with afterburner on and no chance for survival because the aircraft developed this problem at a low altitude. 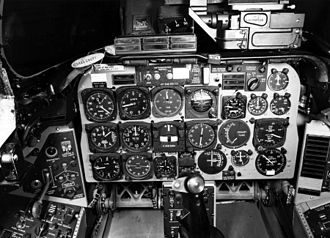 The first F-100A was delivered to the USAF on 27 September 1954 to the 479th Fighter Wing at George AFB in California. Regretfully the aircraft suffered from several major problem areas; flight instability, structural failures and hydraulic systems failures, resulting in 6 major accidents. The entire fleet was grounded on 10 November 1954. The F-100A was revamped by North American Aviation and was back in operation by September of 1955.

Still containing problems, primarily instability and loss of control, caused USAF to phase out the F-100A in 1961. By that time 47 Super Sabres had been lost due to accidents. Due to escalating world tensions, the F-100A was brought out of “mothballs” in early 1962.

The F-100C first flew in March 1954 but retained all the flaws of the F-100A. However, with the upgraded J57-P-21 engine, the aircraft was an excellent platform for “nuclear toss bombing” because of it’s high speed.

Toss bombing was conducted when an aircraft would approach a target at high speed, as it conducted a chandelle maneuver would toss the nuclear device toward the target and having already started moving away from the soon nuclear explosion, would get far enough away to escape any retribution (in theory).

However, the J57-P-21 engine was suffering compressor stalls and the Super Sabre continued instability, despite the addition of yaw and pitch dampers.

USAF started phasing the F-100C out of service in June of 1970. By that time 85 Super Sabres of all models had been lost in accidents.

The F-100D was built with the answer to the F-100C shortcomings as its mission changed from a fighter-bomber to a ground attack aircraft with fighter capabilities in a secondary role. The first F-100D flew on 24 January 1956.

Besides upgraded avionics and AIM-9 Sidewinder and AGM-12 Bullpup missile capability, the wing was enlarged and the vertical tail was increased by 2%, this was to help stabilize the aircraft.  In spite of the modifications, by 1967 USAF had lost 500 F-100Ds mostly by accidents.

During the Vietnam War in 1961, the first F-100s entered combat from Don Maung Airfield in Thailand serving as MiG Combat Air Patrol for F-105 Thunderchiefs. During the time period of 1961 to 1970, the Super Sabre was used as A CAP, ground support, defense interceptor and fighter-bomber.

The F-100 Super Sabre was the subject of many modifications and model variations. The F-100 did not have a satisfactory safety record as 889 F-100s of all models and versions were lost mostly through accidents (242 to combat in Vietnam). Tragically 324 pilots were killed.

Final Conclusion
One must remember that the F-100 Super Sabre was one of the first Supersonic fighters of its day. It set an example for design and development for future advanced fighters such as F-4, F-14, F-15, etc.  It filled a strategic gap until more reliable fighters came on-line.   Certainly, it was a “hot-rod” for its time and provided a valuable service for the United States and its allies. 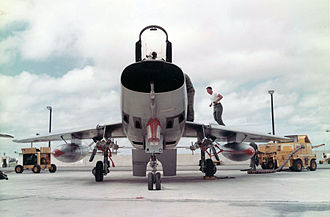 Where you can see the North American F-100 Super Sabre

This is Just a Partial List of the NorthAmerican Aviation F-100 Super Sabre on Display. Check With Your Local Air Museum for More Information. 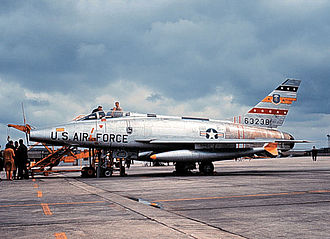