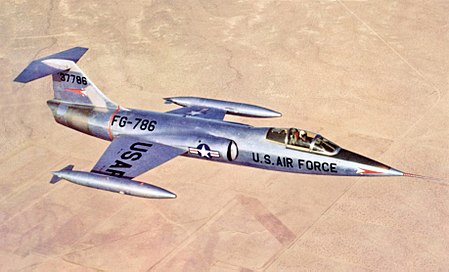 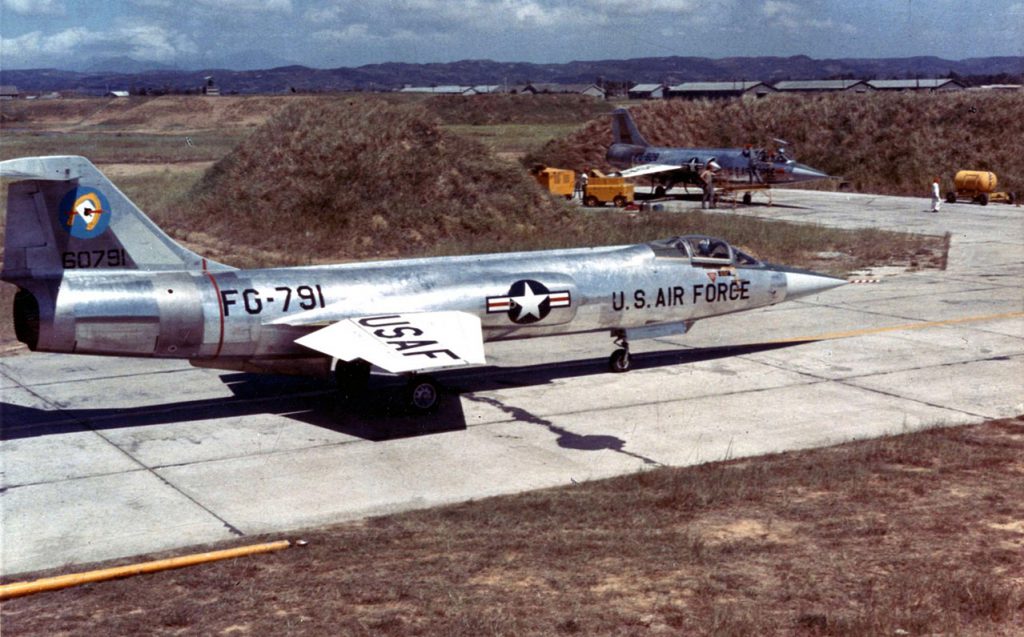 In December of 1951, Kelly Johnson went to Korea and interviewed combat pilots.  At the time the North American F-86Sabrejet was doing quite well against the Communist MiGs, but this was because of better trained American pilots.  In reality, the MiGs were considered a superior aircraft to the F-86 Sabrejet.  The pilots fighting in Korea suggested to Kelly Johnson that a smaller and simpler aircraft would be a lot better performer against the MiGs.

In March of 1951, Kelly’s team met with suggestions of designs from an 8,000lbs design to 50,000lbs.  A fairly small design scheme was selected and named the “L-246” coupled to a new General Electric J-79 turbojet engine with afterburner.  The aircraft would have a straight trapezoidal wing.

Most of the new fighters of the day came out with either a swept or delta shaped wing.  This was something that went against the “grain” you might say.  The L-246 remained basically unchanged through the development into the L-083 Starfighter.

The L-083 Starfighter design was presented to USAF who was interested enough to put out a bid to replace the erratic North American F-100 Super Sabre.

In November of 1952, three other companies also put in bids which were the Republic Aircraft XF-91 Thundercepter, North American Aviation F-107, and Northrop Corporation N-102 Fang.

In March of 1953, USAF granted Lockheed a development contract to build 2 prototypes which were given the title of XF-104.  The mock-up for the XF-104 was read for USAF inspection in April of 1953.  The two prototypes were under construction in May.

The first flight of the XF-104 was 04 March 1954 at Edwards AFB.  One of the prototypes was destroyed in weapons testing drill.  But in spite of the setbacks, in November of 1955, the XF-104 was accepted by the USAF.

As with most developing new aircraft, changes and improvements were forthcoming.  The XF-104 became the YF-014A with an improved General Electric J79 engine with afterburner, modified landing gear, airframe strengthing and a new vertical fin.

The wings were so thin (.016 in) that they required a guard on the leading edge to prevent cutting the ground crew when servicing the aircraft.

It has troubles to overcome such as high landing speed ( which was resolved by a blown-flap, bleed air over the wing system) and because the stabilator was only slightly shorter than the wing length it could cause an opposite reaction when the rudder was applied.

This problem was corrected by canting the wing downward to what is called “anhedral”, and also the aircraft had an aerodynamical drag problem.

The F-104A was designed to use the General Electric J79 turbojet engine with afterburner giving it an excellent thrust to ratio.  Its maximum speed was in excess of Mach 2.

At first, the Lockheed engineers designed the Ejection Seat to blow downwards because of the “T-tail” where it might be a problem for the pilot if he could not clear the tail if ejected upward.   The ejection downward concept was not a good idea, especially at a low altitude,  when out of necessity, should a pilot have to bail out downwards.

The Lockheed C-2 upward firing ejection seat replaced the downward one.  Again a problem arose as the airspeed could be no higher than 104mph.  The F-104  landing speed was around 180 knots.

Finally, the Martin-baker Mk-7 “zero-zero” seat was used.  This allowed the aircraft to be flying (or not flying) at any approach speed. 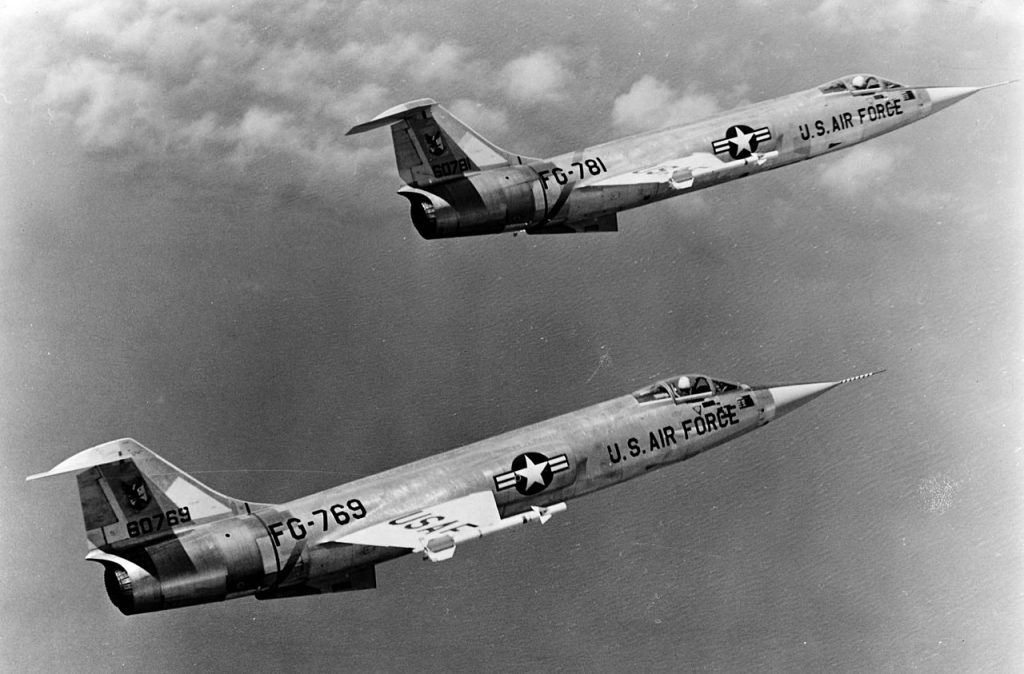 The Lockheed F-104A Starfighter was used by the Air Defense Command of the USAF for a short time as an operational interceptor aircraft.  The two biggest drawbacks were the range and armament did not make the F-104  suited for an interceptor role.  After one year, in February of 1959, the F-1014A was turned over to various Air National Guard units.

However, two international crisis occurred in 1961.

During “Operations Rolling Thunder” in Vietnam of 1965, F-104Cs were deployed as fighter-bombers for a limited time.  Later in 1966 -1967 the Starfighter made its second appearance in Vietnam with TAC (Tactical Air Command).

It did remain in Air National Guard units until it was replaced by the F-4 Phantom.  Most of the 2,500 + F-104s were sold to foreign countries such as Germany, Spain, Turkey, and Italy.  The F-104 was truly a “hotrod” during its time but not very useful as a military aircraft.

The main reason has to be the lack of size both on the wings and fuselage.  But it was an important part of aviation history and a design forerunner for future aircraft.

A note of interest: In the old TV series of “I Dream of Jeannie”, the aircraft Tony Nelson (Larry Hagman)”flew” on the show was a Lockheed F-104 Starfighter

Where you can see the Lockheed F-104 Starfighter

This is Just a Partial List of the Lockheed F-104 Starfighter on Display. Check With Your Local Air Museum for More Information. 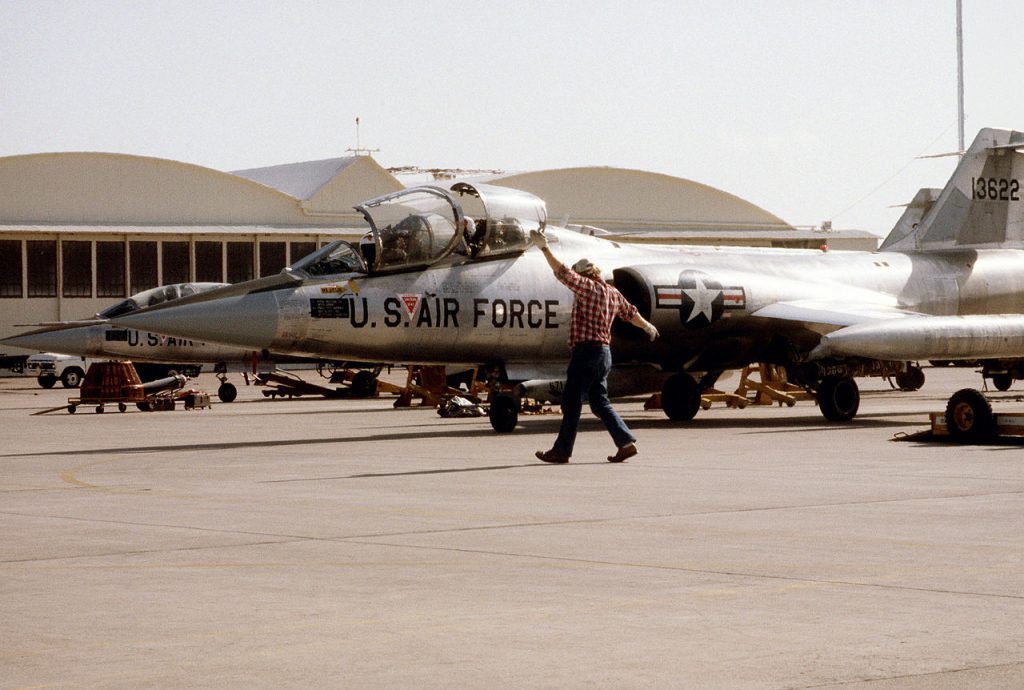 Tech Specs for the F- 104 Starfighter