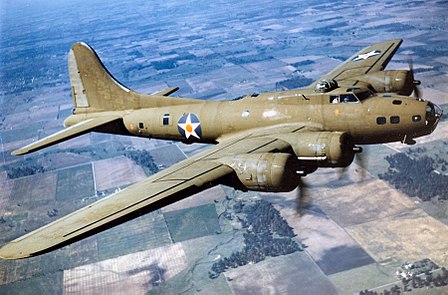 United States Army Air Corp (USAAC) put out a bid with Boeing, Douglas and Martin vying for the contract.  The Boeing entry exceeded the minimum specs for the design, but lost the contract bid when their prototype crashed.

A simple thing, the failure to remove the gust locks before take-off was responsible for the accident.    Boeing was disqualified in the bid because of the accident but never the less,  USAAC was so impressed with the B-17 design that they ordered 13 B-17 for further evaluation.

The B-17 (the factory designed model was “299”) first flew in April 1935.  Production started in 1936 and USAAC took delivery in 1938 of the first of 12,731 aircraft built.  It’s reputation took on epic proportions during the War with stories stemming into the “fantastic” with shot-up aircraft coming in one engine,  to belly landings due to landing gear jammed.

Inspite the first thought that these “stories” would make great movies and books, many of these fantastic things did happen, such as the famous story of the “Memphis Belle” .   (Memphis Belle:  A Story of A Flying Fortress  directed by William Wyler was a 1943 documentary, (later reproduced in 1999) about the 25th mission for crew and aircraft.

In July 1943, the B-17G was introduced to Fortress production line and was produced in large numbers than any other Fortress variant. B-17G entered service with the Eighth and Fifteenth Air Forces in late 1943. In 1945, when the production of B-17G ceased , there’s a total of 8,680 B-17Gs built.

As the B-17 developed, it continually  received upgrades in the power plant,  from the original Pratt & Whitney 1690 “Hornet” engines to Wright R-1820-97 Cyclone 9 engines with a GE turbochargers.

The major design changes ended with the B-17G model as the last evolved B-17 from Boeing.  There were minor variations for special mission types, such as cargo hauling, engine testing and reconnaissance (an “H” model was built for search and rescue) but the G model was the last.

Before America’s entry into World War, the 19th Bombardment Group at Clark AB, Philippines had the largest overseas B-17 group.  About half of the 19th BG was wiped on the initial Japanese attack on 08 December 1941.

What was left of the 19th was used against the Japanese invasion group until it was withdrawn to Darwin, Australia.  The 19th continued to attack selected targets from Darwin, until it was redeployed by General George Kenney in mid-1942 back to the U.S. mainland.

In early 1942, the 7th Bombardment Group was deployed to Java, Indonesia  with a B-24 squadron.  When the Dutch Indies fell to the Japanese war machine, the 7th BG was sent to the Middle East and became the the first bombard group to fight against the Germans in the war.

The first B-17 Flying Fortresses were sent to England in July 1942 to join the 8th Air Force.  The B-17s in England were used for precision daylight bombing of German targets.

Early B-17 models (A-D) proved to unsuitable for use over Germany.  When the B-17E were introduced into the theater, they were considerably more successful.  But the self-defense that w

as expected from the B-17 was not adequate against German Luftwaffe.

It was decided by USAAF leadership that fighters would be necessary.  Joining this escort group were: P-38, P-47, and P-51.

When World War II in Europe began, the RAF had no heavy, long-ranged bombers.  The RAF entered an agreement with USAAF for 20 B-17C.  The C model as with USAAF later on, proved to be unsuitable for combat of this type.  The RAF instead used the B-17 for long ranged coastal patrols.

The USAAF build-up in England begin in May 1942 using B-17E which were greatly improved over previous models.  Major Paul Tebbits (later dropped the first Atomic Bomb) lead 12 B-17Es on a raid of the rail yards in Rouen-Sottoville, France.

This raid had RAF Spitfire escort going and returning.  It proved to be a major selling point on daylight strategic bombing by the Americans.

The American and British leadership decided that “Operation Pointblank” would be established with the Brits bombing at night and the Yanks by day.  This strategy would last until the end of the war.

Several times this strategy would be tested severally especially on the U.S. side when on 17 August 1943, B-17 raids on Schweinfurt and Regensburg resulted in a loss of 60 B-17s and nearly 400 crew.  Then on 14 October 1943 another raid on Schweinfurt cost USAAF 77 aircraft with 650 men lost.

Finally the P-51D and P-47 both with drop tanks were able to escort the raiders to target and return to base.  This greatly reduced the bomber loss.  What was called “The Big Week” B-17 groups flew over 3,500 sorties and lost just 247 aircraft.

On 17 April 1945, the last large raid took place on Germany.  In essence, “Operation Pointblank” was over as a short later, Germany surrendered.

Through many changes, the B-17 became the primary long ranged, 4 engined bomber, used in World War II

It was fast (for it’s time) could carry a large bomb lead, had top defensive attributes, was long ranged, could sustain a lot of battle damage and still able to return to base.

There were 1.5 million tons of bombs dropped on Germany during the war and the B-17 dropped about 640,000 tons of bombs.

On 06 December 1941, a group of 12 B-17s left Hamilton Field, California enroute to the Clark AB in the Philippines via Hickam Air Field in Hawaii.

This was an all-night flight to arrive in Hawaii in the morning (remember long range cruise was 175-200 mph).  Because of the long legs (California-Hawaii-Wake Island-Guam-Clark) the B-17s carried no ammunition or bombs.

When the B-17s arrived in the Honolulu area, the Japanese attack was under way and the B-17s were pretty much sitting ducks.

The only thing that saved them was the Japanese war planes were more interested in attacking the ships at Pearl Harbor.  The squadron lost only two aircraft and no fatalities, the two aircraft lost were shot up so bad they weren’t repairable.

The other Flying Fortresses of the squadron were also unarmed they diverted safely to other air bases in the Hawaiian Islands.

The situation at Clark AB was injected with confusion and contradiction as plans were being made for the 35 B-17s at Clark to attack Japanese targets at Formosa when war was to be declared.

After Pearl Harbor was attacked and war was a reality, Gen MacArthur decided to leave the B-17s on the ground (for reasons unknown) instead of attacking Formosa.  After the first Japanese attack, half of the B-17s were destroyed and within a few days all of them were lost.

In some of the early battles such  Coral Sea and Midway Island, B-17s proved to be ineffective due to the high altitude posture.  Later on in the war, battle strategy brought the B-17 to a lower altitude for more effective use.

On 02 March 1943 during the Battle of the Bismarck Sea near New Guinea, 6 B-17s tried a new tactic of “skip bombing” on a Japanese convoy.

Three merchant ships were sunk and with the help of 13 more Fortresses, the convoy was scattered which allowed Australian Beaufighters and USAAF B-25 bombers to destroy the entire convoy.

The B-24 and B-25 were better suited for low level bombing of convoys and land military targets.

During the war many B-17s were wither shot down, forced down or crashed landing in Germany.  The Germans were able to repair and restore to flying status about 40 Flying Fortresses.

Although none were ever panted with U.S. markings, all of them were painted with German identification and used to teach Luftwaffe pilots attack tactics, as troop transports, and other special operations.

There about 73 B-17s captured by the Soviets due to mechanical problems or battle damaged that landed either in Soviet territory or soon to be captured Soviet territory.  The Russians restore 23 Fortresses to service but none ever saw combat.

Switzerland was furiously neutral during WWII.  Any aircraft of any foreign extraction was fired on or forced out of Swiss airspace.

Several B-17s were shot down or were battle damaged from nearby Germany and crashed on Swiss soil.

In October 1943 a B-17E, #25841 developed engine trouble and landed at an Swiss airport and was interned by the Swiss Air Force and flew by the Swiss until the end of the war.

Three B-17s were rebuilt at Clark AB after Japan had captured the Philippines.  The aircraft were flown to Japan for further evaluation and testing.

They were never used in combat against the U.S. but were used for propaganda measures and training of fighter pilots on tactics against the B-17.

Several of the mentioned below B-17s did not survive the war, but many did and are in Museums across the United States:

Tech Specs for  B-17 Flying Fortress