There were 14,487 Hurricanes built by the Hawker Aircraft company..  The Royal Air Force and Royal Canadian Air Force were the primary users of the fighter.  The Hurricane was relied upon to defend England for the advances of the German Luftwaffe wich sent various aircraft in it’s attempt to conquer by destroying England’s military.

The legendary dogfights between the Hurricane and the German Messerschmitt Bf-109 could fill volumes of military history books.

The Hurricane originated from discussions during the early 1930s between RAF Officials and a aircraft designer Sir Sydney Camm on the subject of a monoplane derivative of the Hawker Fury which was a bi-plane.  the discussions ended as the RAF still wanted an advanced bi-plane which was the thought at the time.

However Hawker continued research and development the the mono-plane concept with such innovative ideas as retractable landing gear and a more powerful newly developed Rolls-Royce Merlin engine then the Fury had.

The military thinking changed a bit over the next year os so and in late 1934 , the Air ministry placed an order for the Hawker prototype.  On 06 November 1935, the Hurricane prototype K5083 had its first flight.  In the course of RAF trials, the new Merlin engine which in essence was a prototype also,  was having it share of problems with numerous failures and shortcomings.

The engine problems aside, the in-flight tests proved to be very favorably with a top speed  at level altitude of 16,200 ft was 315 mph.  The climb rate was impressive and it had a stall speed of only 57 mph with flaps down.  The next problem was the Hurricane had poor spin recovery.

Wind tunnel testing showed a problem with the rudder which required an a small extension piece to the rudder itself.  Since about 60 of the Hurricanes had been built, modifications was needed but future production aircraft were built with the extension piece.In June of 1936, 600 Hurricanes were ordered from Hawker by the Air Ministry.

One of the reasons for the large initial order was that the aircraft was relatively simple construction.  Secondly it’s ease of manufacturing and and finally, inexpensive cost to build .  The first Hurricanes used fabric on wings and control surfaces.  In 1939, the wings were then constructed using stressed skin-metal.

With its’ ease of maintenance, wide set landing gear and benign flying characteristics, the Hurricane remained in use in all theaters of operations where reliability, easy handling , and a stable gun platform were of more importance than performance. 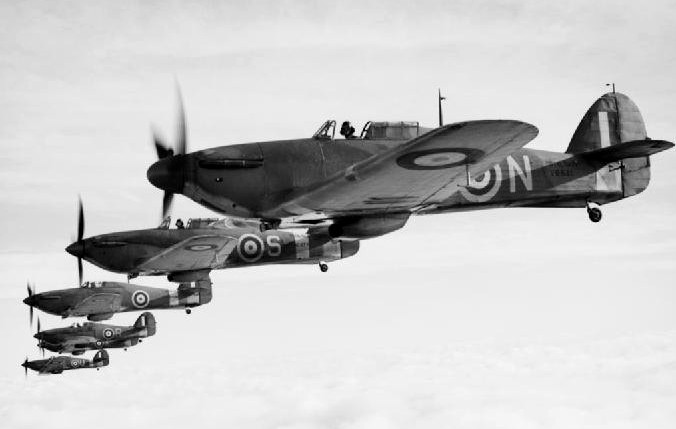 Piro to the start of World War II, Hawker was producing  an excess of Hurricanes beyond the ability of the RAF to organize squadrons to utilize them.  The British government approved an export plan to furnish countries with Hurricanes that stood against Germany .

The Hurricane was sent to South Africa, Turkey, Belgium, Canada, Iran, Poland,Romania and Yugoslavia.  Mainly of these allied nations continued to order more Hurricanes as they saw the “hurricane” came upon Europe in the form of Nazisim.

In September 1939, The Germans attacked Poland which was the start of  World War II .  then on 21 October 39, the first action the Hurricanes saw was a flight of Heinkel He-119 float planes were searching in the North Sea for Allied shipping.

Two Spitfires from separate squadron and 6 Hurricanes attacked the German flight and downed 4 Heindels.  This was the start of many confrontations in the next few years.

During the French Campaign four Hurricane squadrons were transferred to France at the request of the French government to help in the defense of France.

A personal observation of the Hurricane as follows;

“Throughout the bad days of 1940, my squadron maintained a proficient formation aerobatic team, the precise flying controls and responsives engines permitting percising formation flying through loops, barrel rolls, semi-stall turns rolls off half-loops…my Hurricane was never hit in the Battle of France and Britain and in over 700 hours I never experienced an engine failure in the Hurricane.”  Roland Beaumont RAF Hurricane Pilot.

On 10 May 1940, the first day of the Battle of France, there were 208 sorties with 42 victories over German aircraft, with a loss of 7 Hurricanes and all Hurricane pilots survived.

In the final 2 weeks of fighting in France and during the Battle at Dunkirk, Hurricane pilots shot down 300 German aircraft.

The RAf was forced to abandon 178 Hurricanes in France.  The Battle of Britain officially took place from 10 July until 31 October 1940.  During this time period the Hurricane accounted for 55% of the 2,739 German losses.  The Hawker had some shortcomings, it was slightly slower and poorer in acceleration then the Me-109E, but could outmaneuver the enemy.

The favorite tactic of the Messerschmitt was to climb to higher altitude then the Hurricane and then dive dow or “bounce” the RAF aircraft.  The Hurricane could counter this by going head on with the Me-109E or the Hawker could execute an “corkscrew dive” and evade the German that way.

The top ace of the Battle of Britain was RAF pilot Archie McKellar who downed 21 German aircraft mostly in August and September of 1940.

Regretfully he was killed one day after the Battle of Britain was considered over on 01 Nov 1940.  He received the DSO DFC and BAR.

Where you can see the Hawker Hurricane