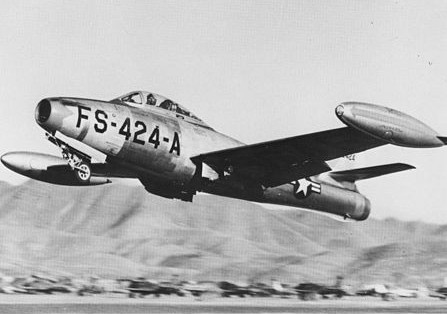 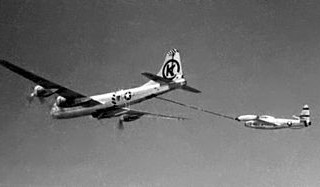 On 11 September 1944, the USAAF released and General Operational Requirement for a day fighter with a top speed of 600 mph and a range of 705 miles. Its armament would be six .50 cl or 4 .60cal machine guns and had to use the General Electric TG-180 axial turbojet which entered production as the Allison J-35.

On 11 November 1944, USAAF sent an order to Republic Aviation for 3 prototypes os the new XP-84 (P==pursuit, the designation F=fighter came later from the new United States Air Force- USAF).  The on 04 January 1945, while the P-84 was still in the stage of prototype construction, USAAF increase their order to 15 YXP-84A and 5 P-84B production aircraft.

Meanwhile, wind tunnel testing was being conducted by the National Advisory Committee for Aeronautics on the YP-84A revealed horizontal instability and stabilizer skin buckling at high speeds.

This preliminary testing resulted in the XP-84 prototype which was limited to a gross weight of13,400 lbs and a more powerful engine the J35-GE-15 with a thrust of 4,000 lbs.    The first flight of the P-84 was on 28 February 1946 at now-day Edwards Air Force Base in California.

The 15 YP-84s were delivered to now-day Wright-Patterson Air Force Base for further testing.  They have an upgraded J35-A-15 engine, 6 .50 cal machine guns (4 in the nose and .one in each wing root)and provision for wing tip 225 gal fuel tanks for each wing.  The new wingtip concept for the F-84 had not been thoroughly tested by the time the first production F-84s rolled out of the factory in 1947.  This would produce aircraft control problems in the time to come. 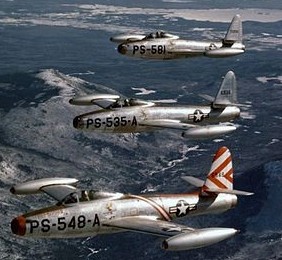 The F-84B became operational in December of 1947.  Due to structural failures in the next few months, the entire fleet was grounded on 24 May 1948.  In spite of reskinning the wings, new engine, and several other improvements, the F-84B and F-84C were taken out of service by 1952.

The F-84D had several improvements such as thicker wing skin, winterized fuel systems capable of using JP-4 type fuel and a new engine; J35-A-17D.  This still wasn’t good enough as the F-84D was phased out of service also in 1952.

Finally, the F-84E became the first effective Thunderjet of the series having the J35-A-17 engine, wing reinforcement, a 12-inch fuselage extension ahead of the wing and a 3-inch extension aft of the wing. to enlarge the cockpit, improved radar, and gunsight along with 230-gallon pylon fuel tanks to increase the range of the F-84 to 1,000 miles.

The next F-84 Thunderjet model was the F-84G which was another straight wing Thunderjet.   This model had the capability of in-flight refueling with an in-flight receptacle in the left wing, an autopilot, ILS system, and a new J35-A-29 engine.  The “G” model came out in 1951 and lasted until the mid-60’s.

The F-84 was used in Korea during that war.  Much like most of those jet fighters of that time, take-off required a long runway especially in the warm summers in Korea.  The rotation speed (when the stick was pulled back for liftoff) was 160 mph and landing/approach speeds were similar.

In comparison, today’s passenger liners land at approximately 135 mph.  The fighter flew very well on instruments and was not prone to cross-wind problems

Pilots had some amusing nicknames for the F-84: “The Lead Sled”, “The Iron Crowbar”, “The Hog”, “The World’s Fastest Tricycle”, and “Ground Loving Whore”.  The pilots also believed (tongue in cheek) that a ground sniffer device was installed to alert the pilot that the dirt at the end of the runway could be “smelt” and would allow the aircraft to become airborne.

It had an airspeed restriction of .82 Mach due to structural problems above that speed.  However, the aircraft speed could be controlled very easy allowing safe dive bombing approaches at 10,000 feet. 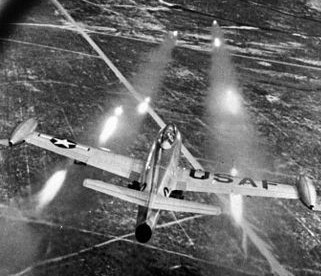 The top speed limitation proved to be a detriment in combat with the MiG15 as there were only eight recorded MiG kills during the war.  The Thuderjet’s mission initially at the beginning of the war was to escort the B-29 bomber, but that was given over to the F-86 Sabrejet.

Where you can see the Thunderjet 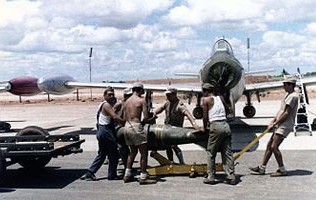 45-59494 at the Discovery Park of America, Union City, Tennessee

This is Just a Partial List of the Republic F-84Thunderjet on Display. Check With Your Local Air Museum for More Information.