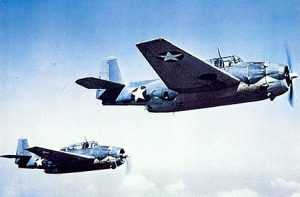 The Grumman TBF or TBM Avenger is a torpedo bomber developed for the United States Navy (USN) in the early forties. It became one of the outstanding torpedo bombers of World War II.

First of all is it a TBF or a TBM? That depends on who built it? Grumman Aircraft Company initially produced the TBF. Grumman was unable to produce as many as the USN needed because of limited factory production and priorities. The government ask General Motors to help out, thus the TBM. “M” designed for General Motors The TBF and the TBM are the same only the last letter determined where and by whom it was manufactured

The TBF will identify the aircraft in this essay. The TBF had its combat debut in the “Battle of Midway” where 5 out 0f 6 were lost, but greatly improved with both in aircraft improvements and pilot skills

President-to-be George Bush Sr. flew a TBM in the South Pacific and was shot down near the Japanese held island of Chichi Jima as his final act before going into the ocean was to bomb the radio facilities on the island. He was rescued by the American submarine Finback.

Hollywood Actor Paul Newman was a rear gunner on an TBF and was on the USS Hollandia which was about 500 miles from the Japanese city of Hiroshima when the first Atomic Bomb from the Enola Gay was dropped.

There were 9,839 TBFs produced during the War. and used by USN, Royal Navy Royal Canadian Navy and Royal New Zealand Air Force

The USN mainstay torpedo/bomber in the 1930s was the Douglas TBD Devastator but by 1939, it was obsolete. The poor showing at the “Battle of Midway” proved the Devastator was “over the hill” as 35 out of 41 aircraft never returned from the initial strike on the Japanese fleet.

The USN put out bids for a replacement in the late 1930s and Grumman Aircraft’s TBF design won as the replacement for the TBD. Leroy Grumman designed the prototype named XTBF-1. It flew on 07 August 1941.

The first two prototypes had some problems as they both crashed during testing. The problems resolved, production continued a t a rapid pace. The TBF would become the heaviest of all single engine aircraft in World War II. It weighed 400 pounds more the United States Army Air Force (USAAF) P-47 Thunderbolt.

It was a large aircraft, but because of limited storage space on existing aircraft carrier of its day, Grumman designed the Avenger to use a new concept called “Sto-wing” which was a new compound angle wing-folding mechanism 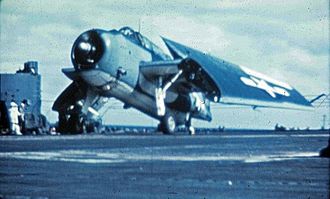 The Avenger was powered by the Wright R-2600-20 Twin Cyclone fourteen cylinder radial engine rated at 1,900 hp. Interestingly the aircraft need 25 gallons of oil and used 1 gallon at start-up.

There were 3 crew members: pilot, radioman/bombardier/ventral gunner and a tail gunner. Later TBF’s forward machine guns were placed from the nose mounted 30 cal to a 50 cal in each wing outside of the radius of the propeller.

The radioman/bombardier/ventral gunner had a massive area behind the pilot as the radio equipment of the day was very large. The third crew member sat behind the radioman and operated the rear facing turret.

The Avenger could carry a variety of ordnance. The bomb bay could house a Bliss-Leavitt Mark 13 torpedo or a single 2,000 bomb or 4 five hundred pound bombs. The aircraft was rugged and stable with a long range capability. It could be used as a commander or CAG (Commander Air Group) aircraft with 30,000 foot ceiling and a 1,000 mile range. 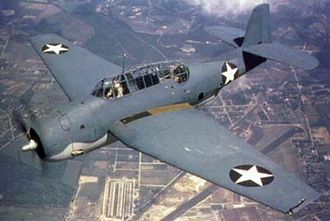 On 07 December 1941, the Grumman Aircraft was having ceremony over a new manufacturing plant that was to build the TBF. This was of course was the same day the Imperial Japanese Navy attacked Pearl Harbor.

By June the new plant had produced over 100 brand new TBF Avengers. They were ferried to Pearl harbor to join the USN Carrier force on the USS Hornet. However only 6 were able to board the carrier as the others were too late as the Carrier Task Force sailed for Midway Island in the first week of June 1942.

Only one Avenger survived the “Battle of Midway” as the crews were just out of training and no combat experience. The Avenger was credited along with the TBD Devastator in drawing the Japanese CAP (Combat Air Patrol) down low so the American SBD Dive Bombers could get a clear shot at the Japanese aircraft carriers. The four Japanese Fleet Carriers were sunk within 12 hours, 3 of them went down in about 30 minutes after the attack started.

On 24 August 1942 was the next major battle between the IJN (Imperial Japanese Navy) and the USN carrier forces was in the Eastern Solomons. The 24 Avengers off the USS Saratoga and USS Enterprise sank the IJN light carrier Ryujo and shot down one IJN dive bomber. Seven TBF Avengers were lost.

Probably the most famous incident or mission the TBF Avenger was on ended in tragedy after the War on 09 December 1945 when 5 Avengers took-off from Lauderdale, Florida on a training missions over the Atlantic now known as the Bermuda Triangle.

Several radio contacts between and the ATC facilities indicated “Flight 19” was lost and having navigation problems. After several hours, no further radio calls were heard. It remains a mystery today was to what happened as no trace of the aircraft were ever found. 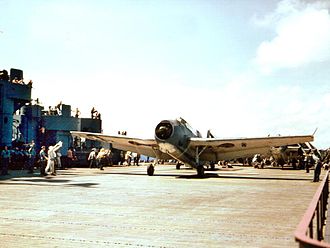 Where you can see the TBF Avenger

This is only a Partial List of TBFs on Display. Check with Your Local Museum for More Information.

Tech Specs of the TBF Avenger