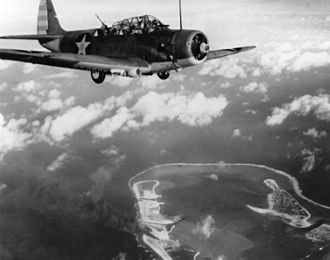 On 30 June 1934 the Douglas Aircraft Company along with Northrop Aircraft (soon to be acquired by Douglas) Vought Aircraft And Brewster Aircraft Company were invited by the USN to to compete to build a new bomber aircraft.

There  were different plans by not only the four companies but from several other aircraft manufacturing companies.  The winners were the Douglas TBD Devastator,  Northrop BT-1 (evolving into the SBD Dauntless) , the Brewster SBA, Vought SB2U Vindicator. 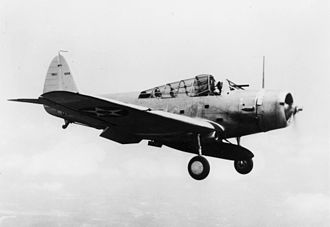 The XTBD Devastator flew for the first time on 15 April 1935.  During that time period, the TBD had many firsts.  It was the first carrier based mono-plane. first with an enclosed cockpit, the first with hydraulically folding wings.

There were a crew of three, pilot, bombardier in the middle seat in the tandem arrangement, with the rear gunner and radio operperator in the rear seat.

The normal TBD armament consisted of either 1,000 lb bomb or an 1,935 lb Mark 13 aerial torpedo.  there were similar arrangements with smaller ordinance that could be used. It had a .30 cal M2 Browning Machine Gun on a flexible mount in the rear.

In the front of the aircraft a .30 or .50 cal M2 Browning Machine gun on the starboard side of the cowling.  It was powered by a Pratt & Whitney R-1830-64 Twin Wasp radial engine.

The XTBD had a flat canopy but the production models had a raised canopy for better visibility.  The TBD went through acceptance tests at NAS Anacostia and Norfolk bases which proved successful.

The prototype was transferred to the USS Lexington in 1937 for aircraft carrier qualification was successfully completed that same year.  A total of 129 Devastators were purchased by the USN and stationed on the USS Saratoga,  USS Enterprise, USS Lexington, USS Wasp, USS Hornet,  USS Yorktown and USS Ranger.

In the next 3 years, the Devastator slowly started to become outclassed by more modern fighters and  replacement torpedo/bomber aircraft was ordered by the USN.  However by the time the Grumman TBF was ready, World War II was now in progress. 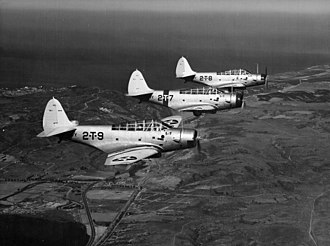 In the early months of 1942, the TBD dis well operating from the the USS Enterprise and USS Yorktown attacking selected targets in the Marshall and Gilbert Island.

They also operated from the USS Yorktown and USS Lexington sinking Japanese shipping off the coasts of New Guinea during March 1942.

In May of the same year, both ships and aircraft engaged in the “Battle of the Coral Sea” in which for the first time sea forces on either side never saw the others sides ships.

There was a problem with the Mark 13 torpedos in that some of them either failed to explode or ran deeper than the depth they were set at.  It took over a year for the defect to be corrected.

Admiral Ray  Spruance who was the onsite Commander had decided that the U.S. forces should attacked after they discovered the Japanese Task Force rather then plan a coordinated attack, this is was to prevent the Japanese from an counter-attack.

Thus the different types of aircraft on the USS Enterprise, USS Hornet and USS Yorktown launched at that their own discretion.  The TBD’s from the Enterprise and Hornet lost contact witheir escorts and started attacking without fighter protection.

By 1942 the TBD was a lot slower than most other Naval aircraft form all Navies.  The Mark 13 could not be launched at speeds greater than 115 mph and the approach to target run was long and slow.  This was a ture formula for disaster.

The Zeros had a field day attacking the TBDs as well as the anti-aircraft fire from the Japanese Aircraft Carriers.  The only positive note was the TBDs’ drew the Zeros down low and when the SBD Dauntless dive bombers arrived the CAP (Combat Air Patrol) was at low altitudes and unable to stop the USN dive bombers which resulted in 4 Japanese Fleet Aircraft Carriers sunk in a short space of time.  (One carrier lasted about 10 hours until it went down).

There 35 TBDs and crews that never made it back home.  After the “Battle of Midway” was over, the USN immediately withdrew the 39 remaining TBDs from war time service.   They were used for training purposes until 1944 when all TBDs were retired.

Although the loss of the TBDs and crews wea tragic, their sacrifice (they didn’t think of it that way at the time) which allowed the SBD Dauntless dive bombers to attack the IJN Carriers relatively free form opposition  not only destroyed the  Aircraft carriers, but the loss of some of Japan’s most experience pilots as they were the ones who were not shot down had nowhere to land.   The war in the Pacific changed directions for the USN as the IJN was on the defensive until their surrender in 1945.

There are no surviving Douglas TBD Devastators Left in Museums or Private Collections.