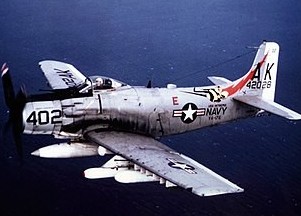 The Douglas A-1 Skyraider is a single seat attack fighter that was called the AD at one time. It served in the military from the saw service in 1946 and was formerly retired in 1985. It saw service in the United States Navy (USN), United States Air Force (USAF), the British Royal Navy, the French Air Force and the Republic of Vietnam Air Force.

It remained in the United States service until the 1970s until replaced by the Fairchild-Republic A-10 Thunderbolt II.

The piston drive Skyraider was designed during World War II to meet the request of the USN for a carrier-based, single seat, long ranged, high performance dive/torpedo bomber.

Ed Heinemann led a team of designers at Douglas Aircraft to build a prototype that was completed 06 Jul 1944. It was called the XBT2D-1. The XBT2D-1 made its first flight on 18 March 1945 and a month later it began it’s evaluation test at the Naval Air Test Center.

In December 1946, after a designation change to AD-1, the first of the production aircraft was delivered to the USN.

The low-wing monoplane which was built in the Douglas Aircraft plant in El Segundo, California at a rate of two a day. The aircraft started out with the Wright-3350 Duplex-Cyclone radial engine but was upgraded several times.

It’s large wings gave it excellent low-speed maneuverability and was capable of carrying a large amount of ordinance, great endurance so it could liter over one area to help a downed airman such as occurred often in Viet Nam.

It was highly used for ground attack missions as it had good armor in the right places.

Heinemann and his team soon realized that they could decrease the take-off roll, increase the range and endurance, use the wings for hanging ordinance and increasing endurance with drop tanks. To make this happen, they lightened the weight of the A-1, 1,800 lbs.

The Skyraider went through 7 versions changes. Starting with the AD-1 then the AD-2, AD-3, these three had minor changes. While the change on the AD-4 was a more powerful Wright R-3350-26WA radial engine.

The AD-5 air frame was widened for two crew (side by side).

The AD-6 was improved with new two-level bombing gear. The AD-7 was upgraded with a Wright R-3350-26WB radial engine.

There were some other variations due to minor up grades. The Skyraider was used as a carrier-based airborne early warning aircraft in the Korean and Vietnam theaters replacing the electronic TBM-3V Avenger. 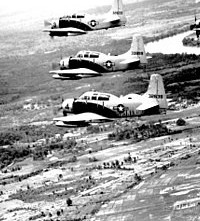 On a mission over South Vietnam

Since the first AD-1 Skyraider was first produced in 1946, it did not take part in World War II but was the backbone of the USN and USMC during the Korean War (1950-1953).

It first saw action off the USS Valley Forge on 03 July 1950 as its ordnance load and 10 hour flying time far surpassed any jets of the time (also most jets of today without aerial refueling).

On 02 May 1951, Skyraiders made to only aerial torpedo attack of the Korean War as they attacked the Hwacheon Dam in North Korea.

When USMC A-1s were used on low -level close-support missions, the Skyraider losses were high. An additional modification consisting of 618 lbs of armor were added to the USN and USMC Skyraiders without any performance loss.

There a total of 128 USN and USMC Skyraiders lost in the Korean War.; 101 in combat and 21 in operational causes. One of the main causes due to the power of the engine.

If a pilot added power to quickly as in a carrier “wave-off” the aircraft might rotate around the engine and propeller and crash into the carrier deck or into the sea. So a pilot must not panic but add power more moderately to avoid this problem.

Another incident occurred after the Korean War when 2 Skyraiders off the USS Philippine Sea shot down a Chinese People’s Liberation Army Air Force La-118.

The Skyraiders had been searching the South China Sea for survivors from a downed Cathay Pacific Airlines DC-7 that had been shot down by the very Chinese La-118 the A-1s shot down.

Although the A- Skyraider was planned for replacement by the A6A Intruder, at the beginning of the Vietnam conflict was still the attack aircraft of most of the USN. Skyraiders from the USS Constellation and the USS Ticonderoga took place in the first USN strikes against North Vietnam 0n 05 August 1964.

A few highlights of the A-1 Skyraider uses in the war were: 2/ North Vietnamese F-17 jet fighter were shot down by the 2 USN piston and propeller driven Skyraiders.   These were the first “gun” kills of the war as most aerial fighting was down with air -to-air missiles.

As the new A6 Intruders came into service, the A1’s were being transferred to the South Vietnamese Air Force.

The helicopter escort mission was probably the biggest use of this slower, prop driven aircraft which still could take incredible damage and keeps on flying. The USAF lost 201 Skyraiders to all causes in Southeast Asia and the USN lost 65 Skyraiders.

As A-6 Intruders, A-7 Corsair II, and Douglas A4- Skyhawks started replacing the aging A-1 Skyraiders, the A-1 was being transferred to the Republic of Vietnam Air Force.

South Vietnam Air Force (RVNAF). By 1973 all A-1 Skyraider aircraft in United States inventories had been transferred to the RVNAF.

The A-1 of all varieties was used by British Royal Navy, Swedish Air Force, and French Air Force. 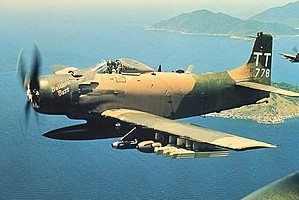 Where you can see the A-1 Skyraider

This just a partial list of the Douglas A-1 Skyraider, please check your local air museum for more information.