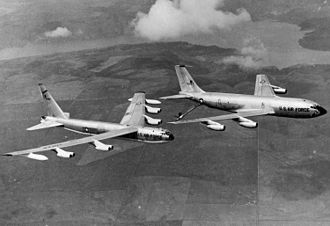 The KC-97 was a derivative of the B-29 Superfortress also built and designed by Boeing.  The KC-135 went into service in 1957 and has been in service now 59 years and is estimated to be used until 2040

The KC-135 was born around the 1952-1953 time period.  The military wanted an jet-powered tanker and Boeing had built a Boeing 367-80 prototype that eventually became the forerunner  for the B-707 series.

From this design the Boeing 717 model as it was called (note:  in the 90s McDonald Douglas developed an aircraft that was named the Boeing 717 (after Boeing and McDonald merged)but these two aircraft are totally different as the earlier Boeing 717 was the initial design name for the KC-135). 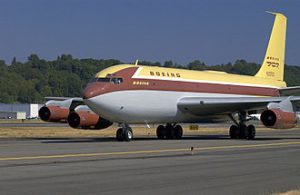 In 1954 USAF put out a bid for the tanker.  Boeing and Lockheed were the primary contractors.  Since Boeing already had the “717” design (from the Boeing 367-80) they were way ahead of Lockheed and USAF ordered 29 KC-135A, the first of 820 total KC-135 Stratotankers. The Lockheed design was later dropped ,.

The KC-135 has two methods of refueling, depending on the receivers.  The first is the “flying boom” which the “Boom Operator” injects the boom into the receivers refueling port, usually near the nose of the aircraft.

Second method was a drogue basket attached to the boom and the receiver (usually Navy or Marine aircraft) has a probe near the nose of the aircraft and the probe is inserted into the drogue basket for refueling.   The second method is much more risky of an operation. 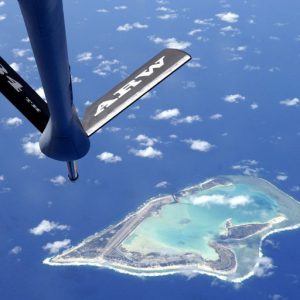 I was on Wake Island waiting to receive a squadron of USMC A-4s from Japan.  One of the A-4s hit the basket drogue too hard causing a breakage in the fueling line.

Fuel was ingested into the aircraft’s   engine intake and a fire started that caused the pilot to eject to save his life.

He parachuted into to Tokyo Bay and was picked up by a Japanese fishing boat, unharmed.

The water injection caused the air flowing into the engines on take-off to be denser and provide more power on the take-off roll.

The water was just for take-off as there was only about 670 gallons of water aboard.  When the water was gone,  the amount of power was reduced, so it was best the aircraft had a good start on altitude by then.

In the 80’s the Air Force bought a whole fleet of retired Boeing 707 airliners with the Pratt & Whitney TF-33-PW-102 turbofan engine.  They obtained these aircraft primarily for the engines.  They outfitted mostly USAF Reserve and Air National Guard KC-135s.   Thus the model,  KC-135E

The final engine retrofit was the CFM International CFM56 high ratio by-pass turbofan.  This aircraft was designated the KC-135R. 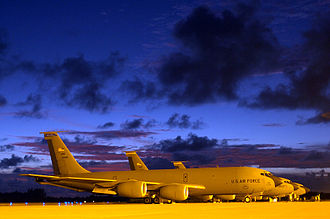 The first KC-135 Stratotanker was introduced to USAF in June 1957.  They supplied aerial refueling for various fighters and bombers of the day.  The main aircraft to have a need for the Stratotanker during the Cold War was the B-52,  as the “Buff” was tasked with airborne alert (24/7) which sometimes required aerial refueling.

When Vietnam War started in the 60’s, the KC-135 “tanked” many aircraft during that conflict not only within the Southeast Asia Theater,  but also aircraft coming in and out of the Theater.

Many different mission type aircraft were retired or reassigned to different uses, however the KC-135 remained at its primary mission of aerial refueling for various types of aircraft, including USN and USMC fighters.

If a receiver has an inflight refueling system, it can be refueled by a KC-135.  Unlike the KC-97 which was prop driven, the KC-135 could maintain a speed equal to the receiver (although actual refueling was not  accomplished at cruise speed but usually at a couple hundred knots slower speed for safety reasons).

It was reported that with the KC-97, jet fighters were in danger of stalling as they “mushed” through the air while the KC-97 was near top speed.  The reverse was true with the Stratotanker near stall speed (even with 30 degree flaps down) when refueling the A-10 Warthog.

In addition to it’s refueling capability the Stratotanker could carry up to 83,000 lbs of cargo.  It had a “side-of-the fuselage” flip door where cargo could be loaded with various loading devices (K-Loader, Forklifts, etc.).  It could also carry up to 80 passengers instead of cargo or a mixed cargo/pax load. 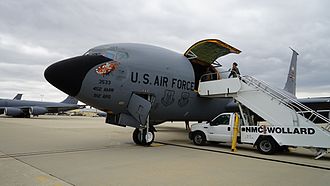 NASA used a NKC-135 for research projects at Edwards AFB CA such as testing the use of winglets to extend the range of the aircraft.  They found about an 7% increase in range with the winglets.  Most new Civil and Military transports/cargo aircraft come with winglets.

The infamous “Vomet Comet” was used to simulate weightlessness during the Apollo Space program.  In fact one of those aircraft can be seen at the Pima Air and Space Museum in Tucson AZ.

Since there were over 800 KC-135 produced,  of all models, there unfortunately ends up being some mishaps.  The KC-135 flew millions of hours, and in retrospect, the safety record was excellent.  I will show just a few of the unfortunate incidents that occurred during the years.

31 March 1959  A KC-135A entered a thunderstorm near Killeen Texas and broke up.  Two engines separated from the wing and one engine struck the tail, separating part of the tail from the fuselage.  Four crew members were lost.

03 February 1960  A KC-135A training flight, taking off from Roswell NM AFB during extremely gusty conditions at the airbase caused the aircraft to skid off the runway into a hanger occupied by two other KC-135s.  The instructor pilot was occupying the jump seat rather then the pilot position.  8 crew were lost from this accident.

28 August 1963 Two KC-135A collided in the Bermuda Triangle killing a total of 11 from both aircraft.

16 January 1965 KC-135(57-144) experienced an engine failure during the take-off roll at McConnell AFB KS.  The aircraft crashed into a busy intersection (off-base) killing 30, including those on the ground.

19 May 1966 A KC-135A  was taking off from Kadena AB, Okinawa JA enroute to Yokota AB JA when rotation occurred too soon.  The aircraft was below V2 rotation speed and thus it crashed on Highway 16 and 12 were lost, including a motorist on the highway.

04 September 1968  KC-135A was enroute from Andersen AFB, Guam Marianas to Hickam AFB HI, when it developed an engine problem and diverted into Wake Island, Mid-Pacific.

Maintenance was supposedly completed and the aircraft took-off to the east on Runway 10.  Just after rotation, #1 engine failed and since the aircraft was heavy, the  pilot tried to make a 180 deg turn and return to Wake.

They were not able to gain enough altitude and crashed into an embankment at the approach end of Runway 28 (westbound) and bounced onto the runway.  There was 56 on board (Crew & Pax) although 11 were lost, 45 survived.

13 March 1982  an Arizona ANG KC-135A was descending into the Phoenix area for landing at Luke AFB as it passed through the clouds it collided with a Grumman America AA-1 Yankee (light aircraft which was VFR).  The Yankee hit the tail of the KC-135.  6 souls were lost.

13 March 1987  A KC-135A practicing an low-level refueling display at Fairchild AFB.  The turbulence from a B-52 that was part of the activity caused the Stratotanker to roll 80 degrees to the left which caused a flame out of #1 & 2 engines.  The crew was unable to recover due the low altitude they were at.  The crew of 6 and 1 person on the ground were killed.

31 January 1989 KC-135A (63-7990) was taking off from Dyess AFB TX when the water injection system failed.  The remaning runway was too short to make a successful take-off and 19 persons perished including 12 passengers (probably Space A as the flight was headed for Hickam AFB HI).

I have given you, the reader about 9 accidents reports.   There were unfortunately about 35 more.  All of the reports included were “A” models with the water injection engines which were under powered.

There were some other mishaps in the 44 that were not included in this section that involved advance models (E & R) of the KC-135.  Take a moment of reverence and reflection for those lost in serving our country.

Thanks, for reading this article.  I hope it was informative.